A group of clowns try to instill authority and boundaries at a festival where there is none
CONTEXT
PLAY is a small, family friendly circus festival, comprising of 5 days of circus skills workshops and shows. Participants are circus enthusiasts; teachers, professionals and hobbyists who are happy to train their skills all day. The festival is safe with little or no security, the crew are part of the festival, not apart from the festival and so don’t dress differently. The rules are mostly implicit and the festival goers self-policing. In a discussion with workshop participants we came up with examples of implicit rules of the festival: As a group we agreed that we implicitly complied with rules that were constructive as opposed to constrictive.
RESISTANCE
When thinking about resistance I looked up some definitions. It is defined as the refusal to comply. It is also opposition to something and a push against or back. I came up with the following things that one might resist and its opposite transformed through resistance to it: 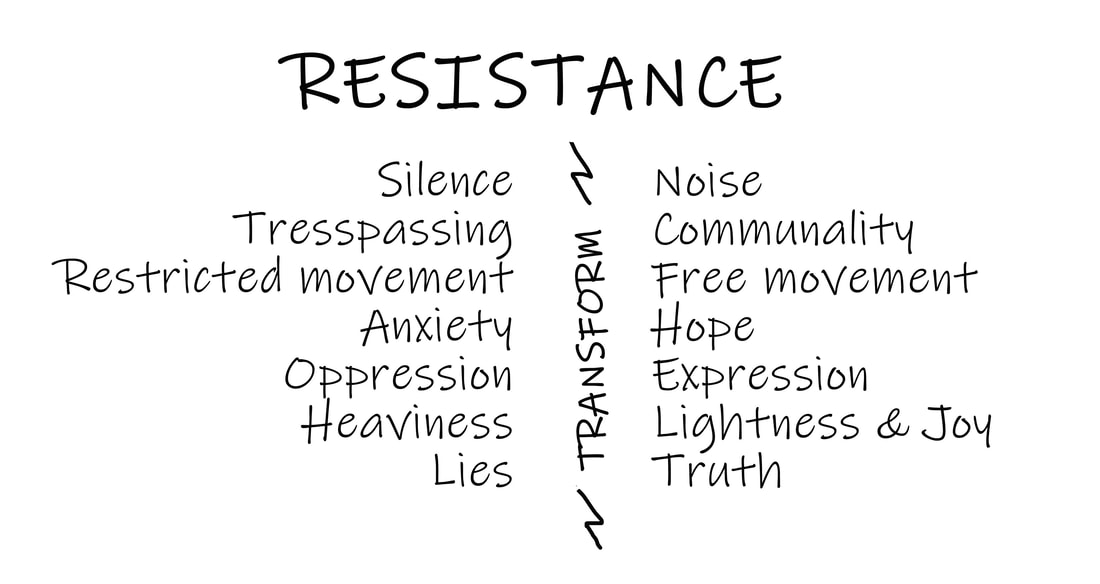 To subvert the space I chose to focus on a particular element that the clowns could resist and oppose; the freedom of movement. Following a brief workshop which explored clown logic, status and boss clowns, I told the clowns that they were in charge of making the festival safer. They would need to put up more boundaries to protect participants from obstacles, flying objects or too much space.
ACTION
Outside on the grass at midday there is over 100 people juggling, spinning or relaxing and chatting. A group of clowns, dressed in high vis vests, doctor’s scrubs and white paper suits try to create more boundaries and safe practice amongst people at the festival. Three clowns station themselves at the stairs to ensure people descended safely by jumping down two feet at a time. Another team tapes out squares on the grass warning jugglers to remain inside for their safety and others. Another group encourages a father and daughter to lay down because of the dangers of potentially falling over. 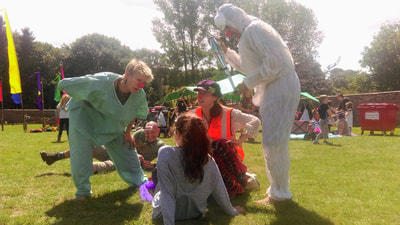 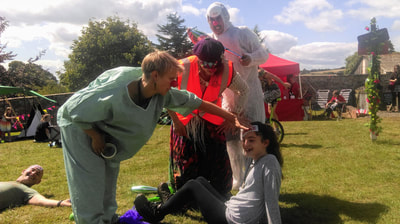 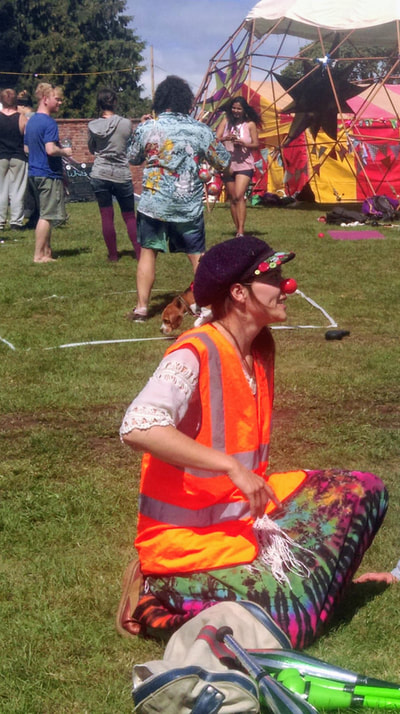 AUDIENCE RESPONSE
The clowns are enjoyed by those who watched and those who participated. Many accept the games proposed by the clowns actively participating in the safety procedures offered, while others passively allow themselves to kept within a taped out cordon. Some people are initially confused by the mixed signals of authority displayed by the safety vest. “People didn’t understand at first. They saw the high viz vest and saw it as authority. And then they saw the red nose and they clicked that it was a game.” An observer noted that the clowns were an important antidote to another element of the festival; “In this context, people are prone to be introverted; focussing just on juggling and so they forget to be playful and socialise.”