Nothing to Sea Here

A reminder of the deadly consequences of plastic, cans and packaging littering our oceans
ACTION
The small act was a procession down the pedestrianised shopping precinct of Northumberland Street in Newcastle. We create a cloak covered in plastic waste, bottles, bags, packaging and cans worn by one performer, a representation of the sea. The cloak drags along the ground like a train, with words written on cardboard: “drowned”,” biodegradable”, “trapped”, “shame” attached in amongst the rubbish. The Sea walks slowly, hunched under the weight of the rubbish, as the performance progresses she seems to get more and more ill, staggering, crawling, trying to breathe. Three performers are dressed as cleaners with rubber gloves, overalls, smocks and aprons. They have pieces of paper attached to them saying ‘nothing to sea here’. They repeat this phrase during the performance urging public to move along and not look. By trying to hide the Sea the intention is that people will try to look. Three more performers carry seaside paraphernalia; bucket, spade and beach mats. The procession moves down street, the Sea is surrounded by the six other performers appearing to escort her or hide her. At three points along the way down Northumberland Street the group stops. The Sea stumbles and falls to the ground, now looking like a pile of rubbish. The three performers with mats roll them out and sunbathe, ignoring the state of the Sea. They throw their rubbish on the ground around them. The three cleaners keep telling the passing public that there is nothing to see here and pick up rubbish they find in the street around them. They pin this to the cloak adding more rubbish the pile that already weighs the sea down. 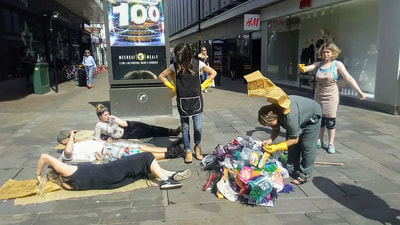 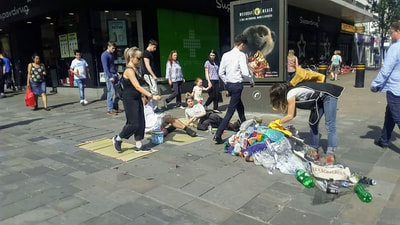 AUDIENCE RESPONSE
The spectacle affects the public in a variety of ways. People speculate about what it means and what is happening. Some correctly assess that it is a protest about plastic. A 60 year old woman says “It is really important; I hope more people take notice. It’s certainly made an impression on me”. A man in his 40s says makes a connection to further environmental issues, “We’re going to run out of coal and gas by 2050. This is a really good protest”. Others are genuinely confused by what it means. A couple of girls in their early 20s look on and laugh while filming it. One says, “I can’t even capture how weird this is”. A man in his 30s asks, “Have they got nothing better to do with their day?” A mother takes the opportunity to discuss the issue about plastic filling up our oceans and killing sea life to her children who are curious about what is happening. Noticing that I am involved she smiles and thanks me. A man says he is an army paramedic and was genuinely concerned about the Sea, asking if she needed medical help. He was clearly unused to performance or protest and did not recognise the signifiers that what was happening was not real. 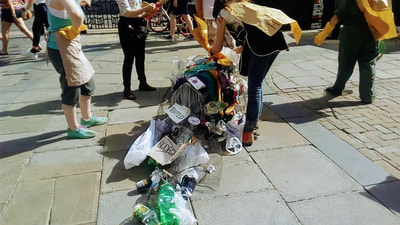 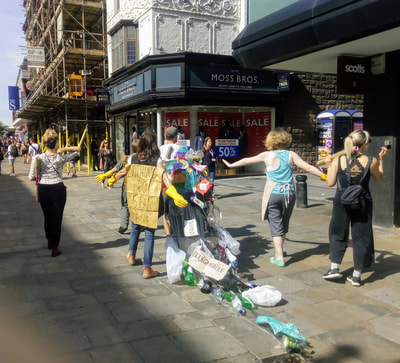 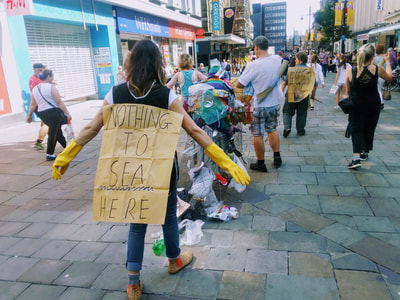 REFLECTIONS AFTER THE ACT
The group described the issue about plastic as a cold topic; an issue that most people would agree with, with few conflicting viewpoints. Unlike ‘Brexit’ which was described as a hot topic; with more possibilities for conflict, debate or divisive opinions.

The issues about plastic have been on social media and in the news a lot recently. It seemed that if the public understood the act it confirmed their view, so the act didn’t challenge them. Others did not understand the act or chose not to. It raised a question about whether they did not care about the issue of plastic or chose not to engage with it spectacle we had created.

An aspect that was missing from the action was a clear message about what we wanted to the audience to think or do. The action confirmed some people’s view, but plastic is so ubiquitous in the world it is very difficult to stop using it. We feel guilt about the amount of plastic filling up the ocean but the actuality of giving up plastic is a lot more difficult when shops and supermarkets fill their shelves with it.

The cloak that we created ended up looking like a wedding veil and the procession could be read as a wedding march. A further development of the act could be to have the Sea in a forced marriage to a big corporation or supermarket. This would give the act a clearer message about who we felt was to blame and needed to be held to account. By naming corporations or using written hashtags in the piece, we could encourage the public to go online and write to policy makers or supermarkets to get them to make changes regarding the use of plastics at that level.
THE WORKSHOP
PART ONE - games and physical exploration to get to know each other, build trust and complicity 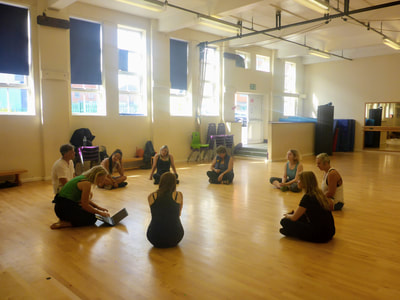 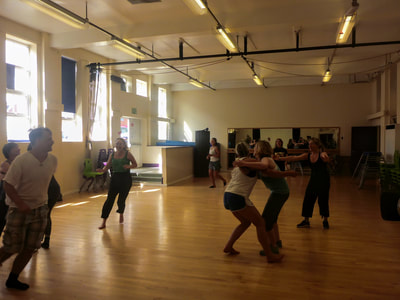 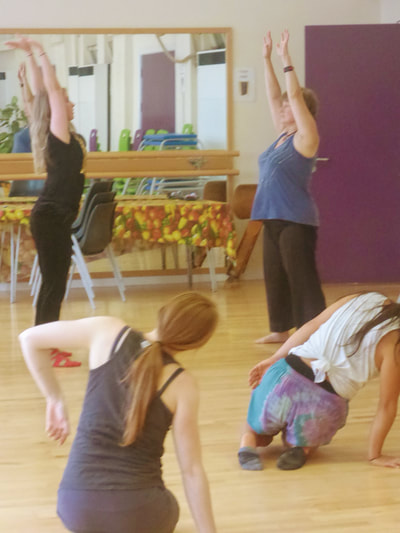 PART TWO - three groups exploring different elements; source material on street protest tactics, issues the group would like to address and circus acts, their embodied metaphors and potential political links. This is followed by brainstorming potential 'acts of resistance'. The group share ideas and collectively we select an act that combines elements of a few reoccurring ideas 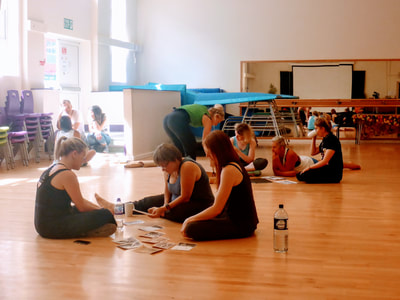 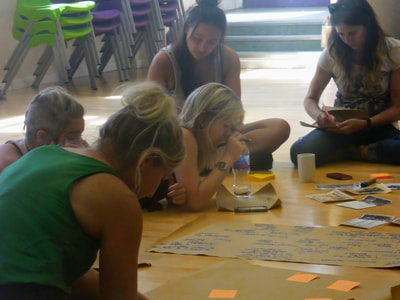 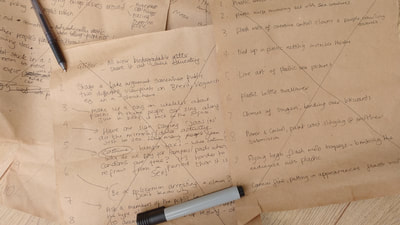 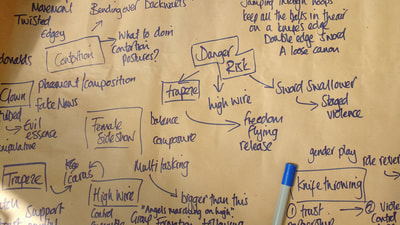 PARTICIPANT FEEDBACK
There were eight women and one man present at the workshop. 45% were aged between 16 and 30, 33% aged between 31 and 45 and 22% were 45+. The participants were a mix of artists, actors, activists, therapists, clowns and circus teachers or performers.

Participants had various levels of experience with circus and street theatre. Everyone had experience of watching circus while 62% had direct experience learning skills or performing. The workshop provided new insights for them; “it is broader than I thought, encompassing lots of things and about being playful” and “it is full of metaphor”. Another enjoyed thinking about “what performance elements can be used in street protests” and with regards to its combination with street theatre another participant said, “I liked the idea of mixing theatre type/circus metaphor and a political issue”.

Everyone had seen street theatre of some form before but only 33% of participants had previously performed on the street. A couple commented that the process had been easy and achievable and perhaps faster than previously thought; “weeks of planning is not always necessary. Doing it and learning as a process of getting it more right is possible activism.” As long as you are not asking for money it is not necessary to get a licence for street theatre activity in Newcastle. This surprised one participant who said “I thought you needed permission to do it. I’m excited about the opportunities ahead.”

All the participants had had experience of protest in some form or another. Most had participated in public marches and demonstrations. One had only done online petitions. The process and experience provided new insights about protest. One learned “how visual it can be and how it doesn’t take a full on crowd to make an impact”. Some of the principles we covered were useful to another who noted that it was possible to be “inspiring even if it is not obvious or immediate” referring to the effect on the audience whilst another found that “playfulness to reduce ‘us’ and ‘them’ is a good idea” and an important factor whilst protesting on the street.

Every participant had found a different element inspiring and applicable for their future work. For some the theory and tools were most insightful as they listed the “info behind circus”, “tools and methods” and the “theory behind protest and street theatre” as useful. In practice, the action we took to the street consolidated other principles about protest including the need for “less subtle messages on the street”, the importance of playfulness and a question about whether there was a “need to explain” the message to the audience. For a couple the process of performing was confidence building as one said it would “link to all aspects of my life”.

Most participants said they would have liked more time for the workshop, “to digest the toolkit and the elements”, “time to expand, discuss, grow!” as well as more time “on the streets” as one said that “the protest felt quick”. Another noted that the workshop could be “a few days as opposed to just one to further the ideas of more of the performers”.