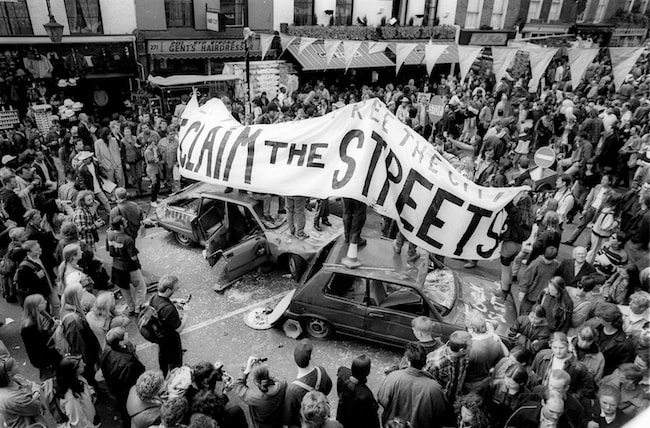 The importance of saying ‘yes’

So often our protest spaces are about saying ‘no’. No to climate change, no to social injustice, no to new airports being built in a time of climate collapse. In the 1990s ‘Reclaim the Streets’ was a UK movement that opposed the privatisation of the roads by the car. They believed that public space is commons and needed to be taken back. Influenced by the rave scene, carnival and the idea of pleasure they would occupy the streets and motorways with wild street parties. In one infamous motorway occupation, performers on stilts wearing giant skirts concealed people with jackhammers digging into the road beneath to plant trees.

“This is pre-figurative politics!” says Jay Jordan. “Instead of saying no, we don’t want cars in the street, we say here is what a street looks like without cars. We prefigure the future in the now. Instead of having motorways how about having forests.”

So having a ‘yes’ is as important as a no. Especially so in clowning. The clown collaborates, the clown says yes. Saying ‘yes’ is an important theatrical principle, key to improvisational performance. A ‘yes and’ helps the games to flow whereas a ‘no’ stops and idea dead in its track, shuts down creativity and development,

Out on the street, the ability of a group to build trust and work together is supported by knowing that you are in tune. Saying ‘yes’ fosters that. It builds complicity in a group, allows games to flow. It allows the world to affect it while fostering collaboration and trust. A rogue clown not attuned to the group, with their own agenda could prove dangerous on the front lines of protest.