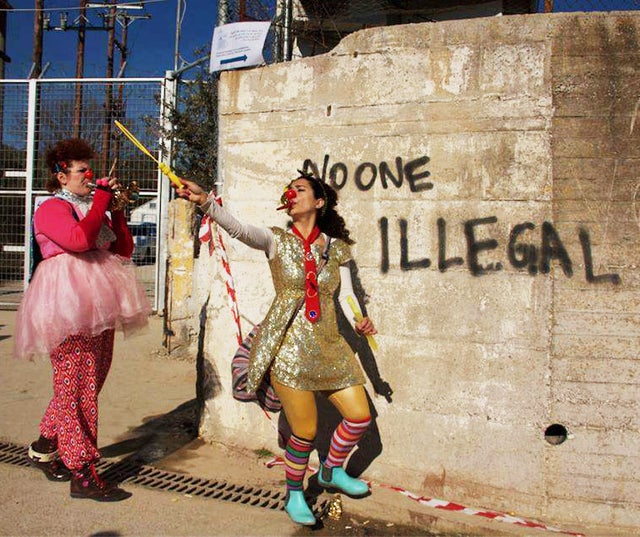 The idea for to use the clown, for Jay, in large part was therapeutic. Following the massive state repression of the anti-capitalist protests in Genoa that led to a protester being killed by police, there was a lot of trauma for activists. “What I’d seen is that activists build this emotional armour around themselves when they have trauma, they stop feeling. But actually you go into activism because you feel the world,” says Jay. It was though his clown training that he could see a way to bring back feeling. “The clown doesn’t have skin, the clown is just this feeling body.”

The emotional liberation of clowning was also acknowledged by Sabine. Dealing with her own trauma of growing up in Lebanon in throughout a twenty year war left her very angry. Discovering clowning in her theatre training in London in 2004 was a revelation, providing an opportunity to play with deal with those emotions in a different way. “I was an angry, angry person and suddenly I was like “oh, look at that anger, it’s so fun so let’s play with it”. And this is how I started clowning.”

Sabine returned Lebanon in 2011 with her company Clown Me In, which she started in Mexico with friend Gabriela Munoz, determined to share the joy and liberation of clowning. They did not start out trying to be political.

“I had no idea there was something called ‘political clowns’ or ‘activist clowns’ or using clowns to fight for something. I was just someone who feels that there are so many things in life that are not right and that makes me angry. And that I wanted to do something about them.”

The clown offers a cathartic tool to express and transform their anger and frustration. In Lebanon there is plenty to be angry about; a garbage crisis, electricity cuts, corrupt politicians, a deadly explosion in the centre of Beirut, an economic crisis and now a pandemic. “You name it, we’ve got it. We also have the influx of Syrian refugees, while the Palestinian refugees are living here in a total, unjust world here in Lebanon.”