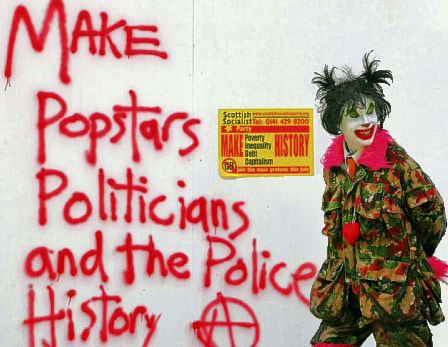 THE TACTICAL & THE THERAPEUTIC

As a form of non-violent direct action the ideas behind the Clown Army were both tactical and therapeutic.
​
Confusion and calculation

For Jay Jordan, co-founder of CIRCA, the aim was to combine carnivalesque elements from Reclaim the Streets and tactical frivolity groups of the 90s and the idea of not looking like a protester. They weren’t simply going to entertain, instead they would take the logic of the clown into direct action.

The key tactic of the clown army was to replace confrontation with confusion. “Police know how to deal with confrontation” says Jay “but find it harder to deal with confusion”. And confuse them they did as groups of riot cops had to deal with the arrival of clowns who had come to help them secure the area. “So by putting ourselves with authority but then saying oh, why can’t we do this, oh but we’re here to help you, don’t you want our help? It completely wrong-footed authority,” says fellow co-founder Hilary Ramsden. “The police just didn’t know what to do with clowns. We heard voices on the police radio saying, “The Clowns are organising, the clowns are organising, over and out.”

CIRCA’s costume of army fatigues were tactical as well. “My jacket had 16 pockets” said Jay, “And when police stop and search you they have to take everything out, more pockets takes longer and holds them up”. For Jay arrested, as his clown persona Colonel Klepto at a protest against an Arms Fair selling arms during the Iraq war (2004) this provided an opportunity to mock authority as an increasingly absurd selection of objects emerged from his pockets; pigs of different sizes (a nod to the derogatory slang for police), various dildos and most unsettling of all, a string of bones. “It’s death”, replied Jay in response to the cop’s uneasy question of what he was looking at. “I take death with me everywhere.”

The idea to use the clown, for Jay was also therapeutic. Following the massive state repression of the anti-capitalist protests in Genoa in 2001 that led to a protester being killed by police, activists were dealing with a lot of trauma. “What I’d seen is that activists build this emotional armour around themselves when they have trauma, they stop feeling. But actually you go into activism because you feel the world,” says Jay. It was though his clown training that he could see a way to bring back feeling to the protester. “The clown doesn’t have skin, the clown is just a feeling body.”

The emotional liberation of clowning was also acknowledged by Sabine Choucair of Clown Me in, Beirut. Dealing with her own trauma of growing up in Lebanon in throughout a twenty year war left her very angry. Discovering clowning in her theatre training in London in 2004 was a revelation. It provided an opportunity to play and deal with those emotions in a different way. “I was an angry, angry person and suddenly I was like “oh, look at that anger, it’s so fun so let’s play with it”. And this is how I started clowning.”

Sabine returned Lebanon in 2011 with her company Clown Me In, which she started in Mexico with friend Gabriela Munoz, determined to share the joy and liberation of clowning. They did not start out trying to be political.

“I had no idea there was something called ‘political clowns’ or ‘activist clowns’ or using clowns to fight for something. I was just someone who feels that there are so many things in life that are not right and that makes me angry. And that I wanted to do something about them.”

The clown offers a cathartic tool to express and transform their anger and frustration. In Lebanon there is plenty to be angry about; a garbage crisis, electricity cuts, corrupt politicians, a deadly explosion in the centre of Beirut, an economic crisis and now a pandemic. “You name it, we’ve got it. We also have the influx of Syrian refugees, while the Palestinian refugees are living here in a total, unjust world here in Lebanon.”

Follow the amazing work of Sabine and Clown Me In here: https://clownmein.com/